PISTON JAM (TOP OF THE NANDI TO YOU)

PISTON JAM (TOP OF THE NANDI TO YOU) 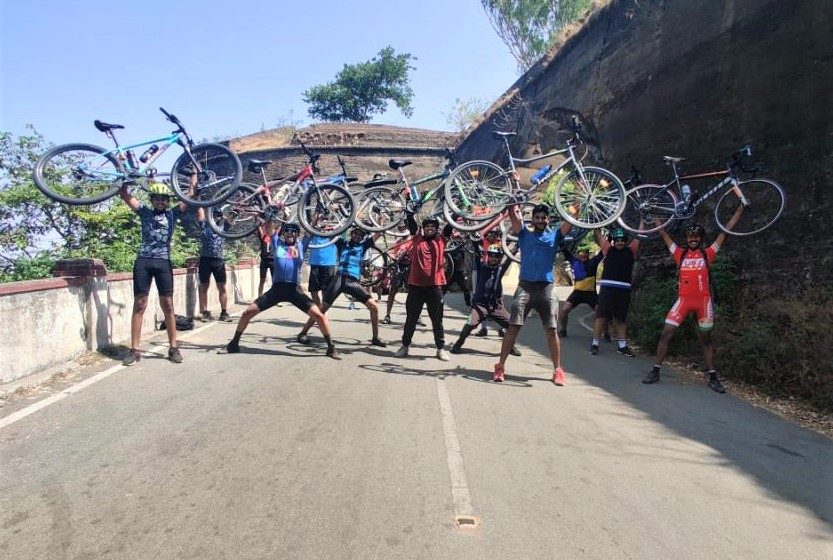 It has been a long-standing tradition of the #mooners to climb up to the top of Nandi on our bicycles. I started this tradition because every single time I climbed this hill, the act made me a different person. EVERY SINGLE TIME! That experience of rejuvenation usually comes at a higher price otherwise, but Nandi seemed like a more accessible version. And also because it is a seemingly indomitable task for most beginner cyclists who come aboard the mooners. The Nandi climb has all the makings of the perfect bucket list item.

I have heard many riders say – “Oh my, I could never ride to the top of Nandi” and all I could say is “Challenge accepted!” And thus began my journey of hauling a maximum number of fresh unseasoned asses to the top of this hill on the first Saturday of every month (and pleasantly watching as it turned into an obsession/addiction to many). The latest edition of April 2021 was my most successful outcome yet towards this cause because we had the largest number of riders ever attend this tradition. So far.

On April 3rd, 2021, 16 riders and an additional bunch of a 5 who’re kinda seasoned at this and rode at a faster pace whom we did not catch much of after we said hi to in the morning, attempted this climb in the hottest month of the year. (Actually, May is the hottest month to do this, but I’m gonna put that fact in parenthesis so the riders who will join us next month will skip reading this barrier and won’t be discouraged.)

Apart from the large number, I achieved a 100% success rate when everyone who started the climb made it to the top. That success rate isn’t new, but it definitely is a big deal with so many riders. And everyone completely adhered to the one rule, that there shall be no pushing of the bicycle. Actually, we have a second rule that you are given only 45-60 mins to make it to the top. But that one is flexible of sorts. Oh, and there’s an unspoken third rule that we HAVE to celebrate with ice cream at the top. 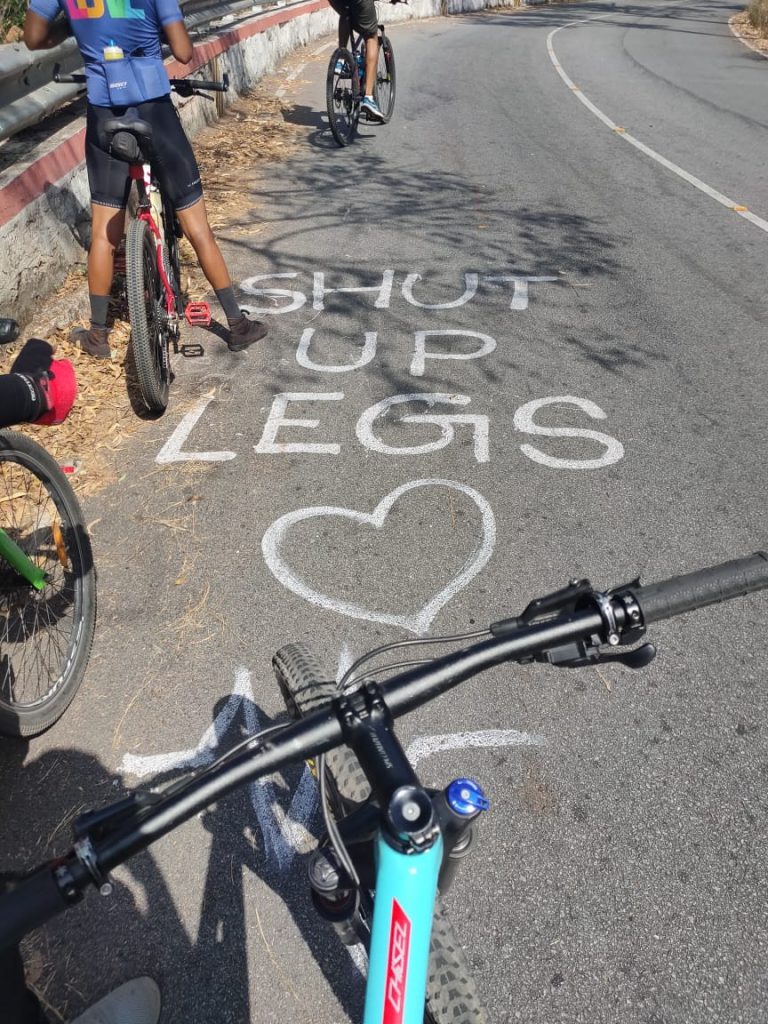 I had long since discovered that on these particular rides, I can’t do any personal best times, no fast vroom vroom riding. I’m here because I said challenge accepted when someone didn’t know that they needed to be proven wrong, I’m here because I mocked someone for their self-doubt, I’m here because at the end of it all, I do find happiness in being right and in being right there when I see you accomplish something you thought was not possible. And mind you, all of this did not come easy, I have had fallen comrades, riders who did not make it to the top and never attempted to again, riders whose needs I skipped catering to on some days when I just had my own demons to slay and gave up on someone a little too soon and went on to derive my own sadistic pleasure. I can’t be a part of everyone’s journey and that’s why I have repeatedly vandalized the route with the graffiti on the tarmac that reads “SHUT UP LEGS”. (Probably not a good idea to incriminate myself)

But this ride of April 2021 is special to me at a personal level, were it not, I wouldn’t be taking the time to write about it and forcing you to endure reading about it. It was special because I set out with the goal of doing two consecutive climbs on this day. Simply because I missed doing one in March and this felt like a good way to compensate. 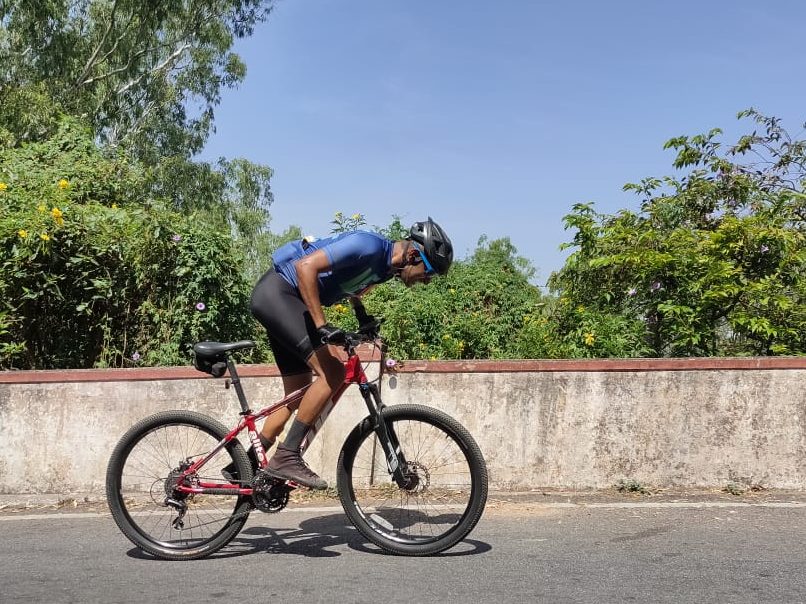 The goal was to start early, smash one climb up as fast as I can and then come back down to start afresh, easy ride it up nice and slow alongside the ones that needed the support. I had chopped off my beard, got myself a crew-style haircut, shaved my legs and apart from all this hair removal also put in some sort of training a few weeks before. I had even managed to snake myself into a sexy race fit jersey and not look too shabby in it. Guess what? I didn’t do my two climbs. I happened to start late because of the Domino effect of things that happened at the start of the ride. And then the climb became anything like a usual Top of the Nandi to you, role playing all kinds of personalities to provide motivation. But what I did manage to do was go up some, then turn around till I caught up with the slowest rider and then ride up a bit and come back down again. In all this up and down business I was done for by the time I was at T minus 3 curves, I had developed a nice cramp and was running purely on the power of the mind like most of the beginners around me would at this point in their first attempt. For the past many Nandi rides, I have been finding difficulty in associating with the beginners because I had forgotten what it was like to do this for the first time. As I reached the summit today, I realized how important it was to hear the cheering of the riders. I realized what adrenaline felt like, I realized that I was in tears. I realized that – The very first time you do something is the time you truly do it for yourself. Every subsequent time becomes for something or someone else. And the futility of my first attempt at doing two climbs ensured that I realize once again what a daunting task riding to the top of Nandi can be. 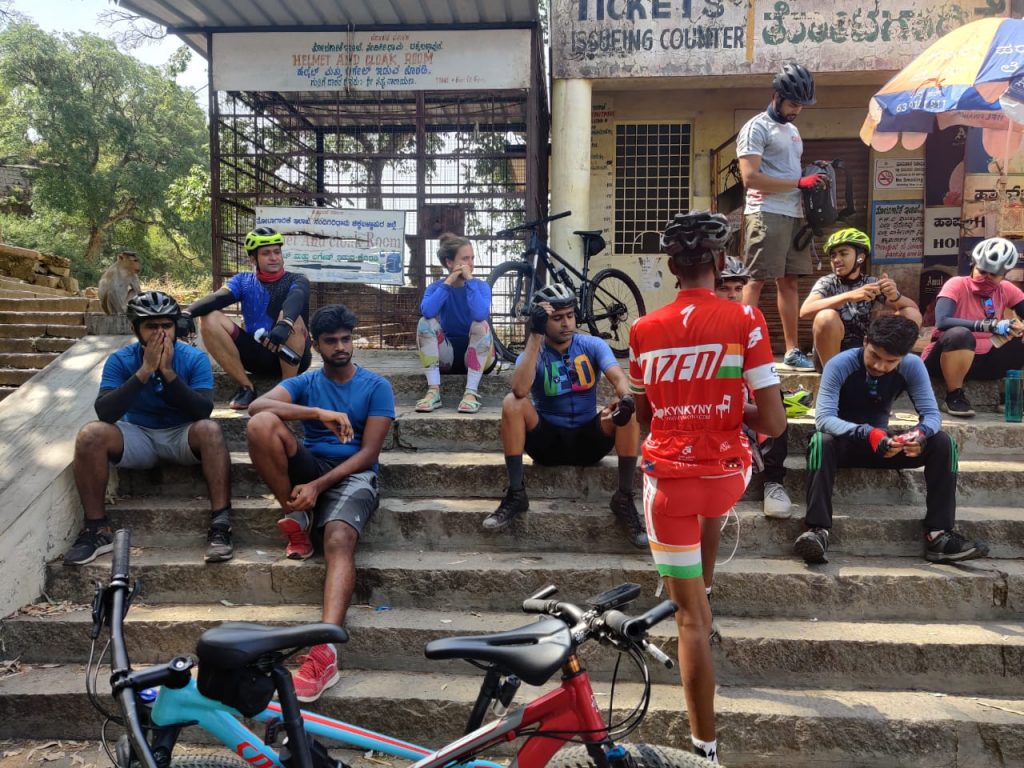 I want all the riders, past, present and future who will attempt ‘Top of the Nandi to You’ to know that the ease with which this ride is put together did not come easy, the break spots we are regular at did not develop overnight, the smiles from the waiters and the welcoming treatment at Sree Hari Hotel, the washrooms, the food recommendations, the spots where we park our cycles, drink tender coconut, the poses which we enforce for pictures, the conversations, the tips and tricks, the stories, the inside jokes, all came from every single past version of the Top of the Nandi to you ride.

“We delight in the beauty of the butterfly, but rarely admit the changes it has gone through to achieve that beauty.” -Maya Angelou

Carry on this legacy and pass it on with pride in the hopes that everyone will find a way to outdo themselves.

Joseph Anish K A or aniSh as he is mononymously known is a 33-year-old Freelance Image and business consultant and hobby bicycle tinkerer. After graduating in History of Art in 2013 from Karnataka Chirtakala Parishad, he dabbled in documentary film making and was present at the sets of corporate films in various capacities. He then moved on to working with a bicycle magazine handling content and marketing there.

aniSh uses bicycles mostly for commute, weekend rides and that one grand bicycle tour in a year. He loves the outdoors and is constantly trying to convince people how he found that cars are pretty much useless after he completed a solo bike packing trip in the Himalayas in 2019. With his love for mountain biking and being on paths less traveled growing with every bike packing trip he concludes, he spends his Sundays conducting mountain biking workshops in the local trail of Bengaluru to help all riders get better on their bikes and not so subtly pushing the agenda against cars.

Know more about him at https://fullmoonlaboratory.com/

Thanks you so much Bharat for publishing this article on your website. It reaffirms my belief that my efforts to get more people to conquer targets on a cycle don’t go in vain. 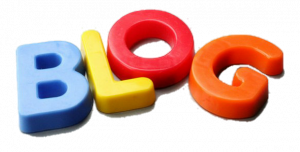 The content of this section has been contributed by individuals associated with cycling. The aim is to disseminate the experience and knowledge gained by them to the cycling community.